Old Petrie Town was formerly known as the North Pine Country Park. In May 1978 Lawrence Smith, a landscape architect who had established a local business known as Landplan Studio, was requested by the Pine Rivers Shire Council to submit preliminary ideas on the development of the former Hyde family’s property on Dayboro Road (west of Petrie). This property was originally selected by James Foreman in 1868. The request included a direction that a reserve for historic buildings should be created in an area surrounding the historic Hyde homestead.

In 2005 the name of the park complex, which was by then leased and managed by the YMCA, was changed to Old Petrie Town. 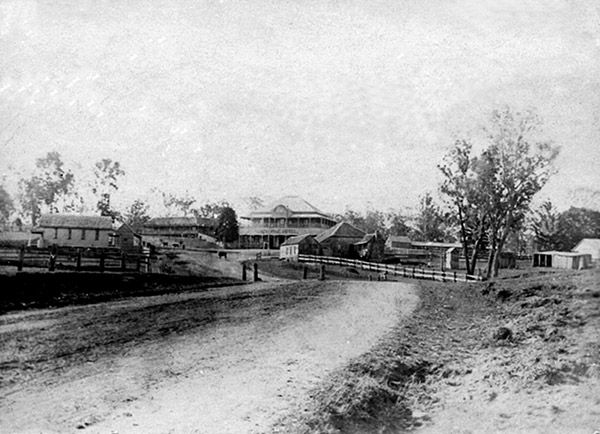 A significant development within the North Pine Country Park was the opening of the Pine Rivers Heritage Museum on Australia Day, 26 January 2000. This farsighted concept was the brainchild of Pine Rivers Shire Councillor and Deputy Mayor, Bryan Galvin, who believed that the heritage museum should be regarded as a gift from the residents of the old millennium to those of the new. The museum encourages visitors to explore the district’s historic character through permanent displays, multimedia presentations and constantly changing temporary exhibitions. The museum complex includes Yebri House, the historic cottage moved from the Petrie family’s Murrumba Homestead precinct in 2006. It is a Campbell pre-fabricated kit house built in the mid-1890s which has been fully restored and furnished to represent the 1920s era.

Whiteside has an interesting history directly connected to the first settlements in the Pine Rivers Valley. The following facts are extracted from the book ‘Tracks and Times’ written to celebrate the centenary of Pine Rivers in 1988.

The history of our locality commences in about 1841 when the Archer Brothers blazed a route from early Brisbane east of the D’Aguilar Ranges toward their property ‘Durandar’ near Woodford. This route subsequently became known as the ‘Old North Road’. There are reports of their drays loaded with provisions being severely bogged near the North Pine River. Interestingly the river was first referred to by John Oxley (1823) as the Deception River and then unofficially the Eden River (1842). Remnants of this ‘road’ can still be seen north from the site of the Harrison’s Pocket Provisional School (opposite Bullocky’s Rest), crossing the North Pine river at Gordon’s Crossing (now flooded by Lake Samsonvale), then traversing along the river flats near the junction with Whiteside Creek and up the slopes, across Dayboro Road towards Narangba.

The Griffin family: Captain George Griffin, sons Francis, William and John, originally from the Orkney Islands, Scotland and then Sydney were the first free settlers in the region (1843) when they ‘took up’ all the land (28 square miles) along the banks of the North Pine River from Moreton Bay to Terror’s Creek (Dayboro) and north almost to the Caboolture River – the first pastoral lease established in the Pine Rivers District after Moreton Bay was declared open to free settlement. They named the property ‘Whiteside’ and it was operated in two ‘runs’ with Sideling Creek the boundary between the two areas - the coastal section was known as ‘Redbanks’.

The ‘Whiteside’ homestead was established by Francis on a hill overlooking the North Pine River adjacent to Quinns Crossing on the Petrie to Samsonvale Road, part of the first main road north of Brisbane. Consequently the Griffins accorded bush hospitality to squatters, pastoralists and officials who passed this way. Initially the family worked the property for sheep but this was later changed over to cattle. Captain George Griffin was away for most of the time with naval duties at sea and did not reside permanently at Whiteside until 1845. Francis left the area in 1847 and following Captain Griffin’s death in 1851 his widow Jane managed the property with their son John.

William Joyner came into the area (1844) purchasing a run on the south bank of the North Pine River which he named ‘Samsonvale’ after the highest peak in the D’Aguilar Range, Mt Samson. William lost his life in 1847 when the paddle wheeler ‘Sovereign’ was wrecked on the Stradbroke Island south passage bar. George Griffin’s son John later married the widow Isabella Joyner (1852) and then managed all of the family properties on both banks of the river. By the late 1860’s the Griffin family had relinquished all connection with Whiteside. Samsonvale was worked by the family as a dairy and beef property until the second world war and was subsequently resumed in 1970’s for the North Pine Dam.

The Griffin family kept detailed diaries of their time on the properties and these provide an interesting and valuable insight into life of the early settlers.

Tom Petrie acquired a large section of ‘Redbanks’ east of Young’s Crossing (1858) which he named ‘Murrumba’ and the property was managed successfully until his death in 1910. The avenues of Bunya Pines, Hoop Pines and Kauri Pines in the Our Lady of the Way school in Petrie mark the site of the Murrumba homestead.

Queensland separated from New South Wales in 1859 with consequent expanding settlement demands for the prime areas of Samsonvale and Whiteside. The ‘Whiteside Run’ became available through a lease system (1868) and the homestead section was acquired by Mr McGaven. James Foreman obtained the 16 hectare section at the junction of the North Pine River and Sideling Creek – now North Pine Country Park. He successfully farmed the site for the next seventeen years, also acquiring several neighbouring properties before finally returning to England. The Hyde brothers were the last of the families to live on the property.

The Whiteside locality continued to develop under a series of owners and in 1970’s the area was subdivided into the acreage lots we know today.

Old Petrie Town is managed by the Y Brisbane

The Traditional Custodians of Country in our region are the Gubbi Gubbi (Kabi Kabi), Turrbal and Jinibara people and we acknowledge each of them as Custodians of Moreton Bay.